It is often said – mostly without reference to data – that the environment for innovative launches is more competitive than it has ever been. Is it true? IQVIA has the long-term market data, global reviews dating back to 1978, to investigate and has analyzed nearly 30 years of launches in major therapeutic classes, from multiple eras of pharmaceutical industry development.

Starting with the primary care era from 1997 to 2005, when key launches were primary care blockbusters, such as Losec, Diovan and Lipitor, IQVIA took five key therapeutic classes from that era that were consistently in the top 10 therapeutic areas in terms of sales for the time period.

In the case of the first era, 1997-2005, the classes covered were: statins, proton pump inhibitors, SSRI antidepressants, erythropoietins and angiotensin II antagonists – in other words, four primary care therapies and a specialized care (albeit widely used) therapy. Launches in these five therapeutic areas took place from 1988 (launch of the first statin, Mevacor).

A second “transition era” from 2000 to 2015 was that of older specialty products, including those for multiple sclerosis, early immunologic biologics, and oncology. The third era saw five specialty therapy areas consistently in the top 10 most valuable areas over the 2015-2021 period – HER2 mAbs, HIV antivirals, hepatitis C antivirals, interleukin inhibitors and mAb PD-1/L1. Launches in these therapeutic areas took place from 1995.

For each class, IQVIA recorded new active substances entering the class by year up to 16 years, and also calculated the market share in global value at two years of market entry for each. From there, there are two measures of competitive intensity and its consequences – competitive intensity being the number of subscriber launches entering the class, how quickly they did so, and the impact of this competition being the share of the world market (defined as the class) reached at two years by each launch.

During the first era of primary care, new active substances entered therapeutic classes at an average rate of one every three years. The first product on the market had ample time to establish itself and a class market share, two years later, of 100%.

Competitive intensity has increased dramatically – from a launch, on average, once every two years in the therapy classes that dominated the transition era, to nearly one new active substance launch per year in the that dominated the era of specialty care. The first class launches barely have time to establish themselves before they hit the competition, and then the competition just keeps on coming. The number of products in a class at age 16 has increased from an average of six in the primary care era to 12 in the specialty care era.

As shown in the chart below, follower products now achieve decreasing market share on average, unless class followers are focusing on completely new indications and therefore gaining access to new markets, such as Stelara the did in interleukin inhibitors. On average, only the top three class entrants achieve more than 10% class market share at two years for the latest specialty era. For the primary care era, the top five entrants, on average, achieved more than 10% market share in their first two years. 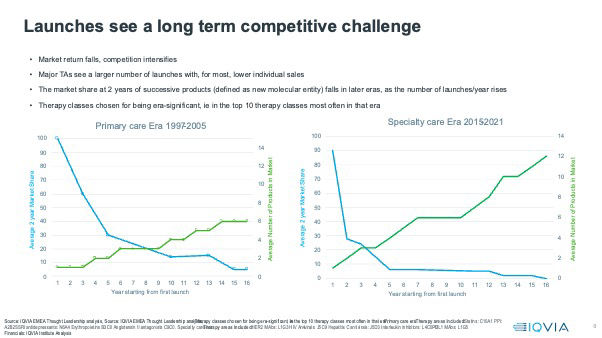 The forces shaping the launch environment are likely to increase competitive pressure, with drugs more targeted in narrower indications and more tightly defined markets. Multi-indicationality may provide a loophole, but only until very similar products also acquire those indications, which they quickly will. Payers are motivated to consider that they only need one or two products in each indication and can deny access or demand steep discounts for subscribers they consider superfluous. In therapeutic areas, such as oncology, where outcome data drives the choice of standard care products, first to market is first to generate outcomes and other real-world data, which is then a formidable barrier to establishing and using subscriber launches that don’t have this wealth of data. What should companies do to give their launches the best chance in this environment?

2. Early and effective pre-launch preparation has always been critical to launch success, but never more so than today. Launch planning should include competitive scenario planning, even for first-to-market, from the earliest stages, as the competition will almost always follow quickly. A strategic and integrated evidence strategy should be at the heart of launch planning and preparation – building the evidence library early and quickly is critical to establishing and maintaining competitive advantage.

3. Third, speed of trade execution and launch is critical. Even though small hints come first, they must be consolidated and rolled out to hints executed at ruthless speed. Customer-facing teams must seek out every opportunity for interactive, non-promotional and promotional engagement, across all channels available to them, with unprecedented speed and focus. Again, the right data and the AI/ML-powered processes to use it are key.

All of this pressure is, of course, on top of the post-pandemic triple challenge of reduced opportunities for patients, reduced opportunities for engagement with healthcare professionals, and tight drug budgets with increased barriers to access. – which lowers the sales performance of most positions – pandemic launches. Launching innovative new drugs has never been easy; getting it right in the future will be the toughest challenge.

Sarah Rickwood has 30 years of experience in the global pharmaceutical industry and led IQVIA’s EMEA thought leadership team for a decade. It provides insight into global launch, innovation and pharmaceutical trends and competitive challenges.